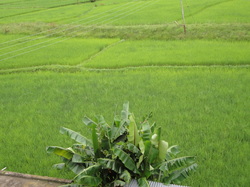 A banana tree next to rice fields.
At the end of the day in Paro, our tour guide told us that he wanted to show us a traditional Bhutanese farm house. We were very excited to see how a regular family lived in Bhutan, so we happily agreed and were very glad that we did.

When we first arrived, we walked around the back of the house and up to the second floor. The house had three floors total, the first being for the livestock, the second for the family, and the third for making and drying hay for the livestock. We were greeted by a young lady who let us into her home with open arms.

Our tour guide showed us the living room, which can be turned into a bed room when there are many guests, and then the kitchen. The lady who owned the house went into the kitchen to make some tea for us as we continued to explore. The most spectacular room in the entire house by far was the room we saw next, the Altar room.

The Altar room is something that every house in Bhutan has. When walking into it you feel as if you are walking into one of the many Dzongs or Monasteries that you visited on your trip. The walls are painted with images and important peoples, the altar itself is decorated with cakes made by Monks who visit the house, there is incense burning in front of the statues that are behind encased glass, as well as offerings to the altar as well. It was very shocking to see such great detail put into the altar room, as it really did resemble the Dzongs that we had seen on our trip.

The next room we went to was the sitting room, where the lady who owned the house gave us some of the delicious tea she had made as well as rice snacks. We sat and chatted for a bit, and she told us that he has many home-stay guests over the year. Some that come every year! We were saddened that we had not signed up for a home stay, as it would have been a great learning opportunity.

The next room we went to was the hay making room. Long ago there also used to be a natural refrigerator in the same room, using windows and the wind to make it cooler, but it was no longer in use. We then went and saw the only cow on the farm. She was a very large cow and was pregnant. She had a large section of a barn to herself and plenty of food.

After that, we went to the bathrooms, where our tour guide showed us how the water is heated for baths. First, rocks are heated up over a fire, then water is put into rectangular wooden baths that have a separation in them at the bottom, cutting off one fifth of the tube from the rest, though there is a small hole connecting them. Once the rocks are hot enough that they are glowing red, they are placed in the smaller section of the tube, warming the water. More hot rocks can be placed in if the water cools.

The entire farm was surrounded by rice fields. It was a beautiful place, and I highly recommend asking your tour guide if it would be possible to either include a tour of a traditional Bhutanese farm house, or if arranging a home stay would be possible.