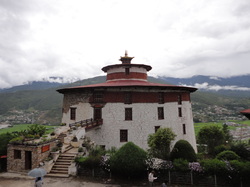 The old building, damaged by the earthquake.
The National Museum is currently going through a transition stage, as the original building for the museum was damaged during an earthquake in 2011 and now is too dangerous to go into. Due to this, there are many exhibits that are not available to view, as they have not yet been transferred to the new building, which can be seen in the image above.

We could not take pictures of any kind inside the museum, so I can only describe what was inside. When you first enter there is a 3D representation of the entire country spread out on a table to your right. It shows the rivers, roads, protected areas, and the hydro-power projects around Bhutan.

The next part of the museum shows various masks that are used during different ceremonies and festivals. It is really incredible the amount of detail that is put into these masks and how deep their meaning can go. Next is a room dedicated to tapestries dating back thousands of years. Each one has a detailed description of its origin and meaning.

If you continue on, you will see a variety of different historical items. There is traditional clothing on display, urns, iron chains that have not rusted after centuries, and even the precious horse egg (sometimes called a unicorn egg), which is said to bring great fortune to the person who owns it. The next section shows a pictorial history of the Five Kings of Bhutan, showing important historical moments, and the final room showcases a hologram projector, which shows different artifacts that could not be displayed in the museum in their actual form. Following the projector are pictures of the same artifacts with descriptions and other information.

After this the museum tour is complete and you pass by the gift shop, you are done. In reality though, the museum has many more exhibits, but they are currently trapped inside the old building which cannot be entered until it is repaired further.