On Top of the World: Tiger's Nest 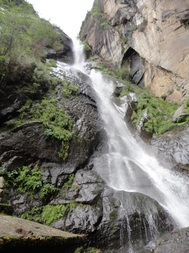 The waterfall from the Heavens.
In the 8th century, Guru Rinpoche (Guru Padmasambhava) flew to a cliff-side cave north of Paro on the back of a flying Tigress.  Upon landing, he defeated an evil demon and meditated in the cave for three months, prior to spreading Buddhism throughout Bhutan.  Nine-hundred years later, the Taktsang Palphug Monastery was built around the cave, which by this time had become a famous spot for meditation, and dubbed the "Tiger's Nest."  Because of its fame, and cultural and religious importance, it is protected by guards unlike the other monasteries in Bhutan.

It is a two hour forest hike up the mountain to reach the monastery from Paro Valley.  A pony can be hired and ridden three quarters of the way.  On our hike, we spotted a white langur (monkey) family, who could jump from tree to tree with ease.

The view approaching the monastery is the most spectacular when the "waterfall from heaven" can be viewed to the left, the monastery sitting comfortably on the cliff-side at front, and the city of Paro to the right.  Colorful prayer flags adorn the winding path that leads to the monastery.  One can guess the challenge of getting building materials and supplies to the site using the narrow path along the cliff edge.  There is a legend that workers could not deliver the Guru Rinpoche statue to the monastery because of this.  Guru Rinpoche then spoke to the workers through the statue instructing them to set the statue down and wait until morning.  At dawn, a large black demon appeared and picked up Guru Rinpoche's statue, carrying it nimbly and easily to the place where it now sits in the monastery.  It is said that Guru Rinpoche had turned the demon from a villain into a protector of the mountain.