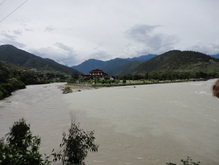 This Dzong is the most impressive of all the Dzongs in Bhutan, as the Machen Lhakhang, a temple inside the Dzong, enshrines the mummified body of the Shabdrung Ngawang Namgyal who passed away in retreat here in 1651. Zhabdrung was the unifier of Bhutan. The building where he rests cannot be entered by any except the monk who takes care of the building and royalty.

When you enter the Dzong, you will see the four direction kings immediately, followed by a poem puzzle, and two classic story paintings. You can see images of them below in the slide-show.

The Four Direction Kings
In Buddhism, the Four Heavenly Kings are guardians of the faith, each representing and protecting one of the four cardinal directions (i.e. north, south, east, west).  According to legend, they are some of Buddha's earliest followers.  They are portrayed differently by different Buddhist sects and various cultures.

In Bhutan you will see the four direction kings before entering any Dzong. The North King is yellow skinned and in his right hand carries a victory banner.  In his left hand, he carries a mongoose, a symbol of wealth.  You may notice that the mongoose spits out valuable gems. The East King is portrayed with white skin.  He has the power of music, and thusly holds a stringed pipa instrument.  Many musicians pray and make offerings to the East King, to give them musical talent.  Many instruments in Bhutan, have his likeness painted on the wood.

The West King is red in color, and carries a stupa in his left hand and a green serpent in his right.  He is a guardian of the land and earth. The South King is the most fierce and is blue skinned.  He always carries a flaming sword in his right hand, and the hilt in his left.  He is also the most heavily armored of the four. (See the slide-show below for images of the four direction kings.)