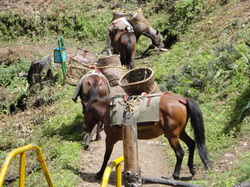 Pack horses delivery supplies to the monastery.
The hike up to the Tango Monastery is about an hour long, depending on how much stamina you have. Having never hiked up a mountain before, I found it difficult not to stop and rest frequently, which was a bad idea as it made it even more difficult for me to start hiking once I had sat down. Try to keep a decent pace that you know you can keep for a long period of time. Even if this pace is slow, it is better than going quickly and then having to rest frequently.

Along the hike, we saw pack horses coming down after taking supplies to the monastery. The monastery itself is also a university where monks study religious texts. Only male monks are allowed to live at this monastery. There are female monasteries where nuns live, but they are in a different area.

Once we reached the top and were inside the monastery, we were no longer allowed to take pictures. The inside was breathtaking and filled with interesting sights and sounds. We were able to sit down and view a religious ceremony where we were given tea and bread. If we were to have stayed longer, the monks would have eventually given us money, and shelter, regardless of who we were or why we were there.